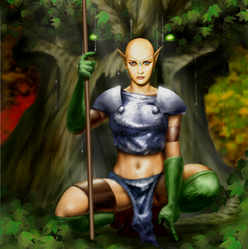 Despite great advantages in some aspects, the Wood Elves are a heavily unbalanced race with weaknesses that can be easily exploited. If the Wood Elves can survive the early phase of a battle, they can produce a force as lethal as any in the game. If they can manage to fully upgrade their archers and Treants, there will be little that can stop them. Their slow resource collection and poor melee options in the beginning often result in an early exit for the Wood Elves however.

As with all Elves, Ancient Wisps are needed in your retinue to generate extra crystal income. Wood Elves boast the best basic missile units in the game. Focus on collecting metal as early as possible, as this is needed to keep the Forestguards and Gladewardens rolling off the assembly line. Mix a Druid in with the Magic Defender attribute if you need protection (Call Lightning is effective against swarms). Your goal with the Wood Elves is to hold out while you develop your archery skills (Bowyer, Fletcher, Bowmaster and Fire Arrows), obtain the buildings/runes necessary for Elven Hunters and Treants and research the sight upgrades. Elven Hunters are the most effective hit-and-run unit in the game, especially as the archery advances are obtained. Once your archery and sight skills are obtained and you have a sufficient number of Gladewardens and Elven Hunters (Gladewardens are usually a better choice in 1.03.24 as Elven Hunters don't get certain bonuses from the archery upgrades such as the range increasing ones), there should be few defenses that can hold out against you. Note that these units defend a base as well as they attack one - take advantage of that while you patiently buy skills and improve your base. Once upgraded with enough sight upgrades and the archery upgrades, Gladewardens become incredibly powerful and very, very hard to stop. This is because they can see as far as they can shoot at this stage, and they have 12 range due to the archery upgrades, allowing them to safely outrange and burn down ungarrisoned towers. Treants are extremely useful melee units as well, especially given their entangle ability (can be used to slow down any would-be archer counters) - except against opponents with fire based attacks, which are plentiful. the Piercing resistance it provides is invaluable, as they can act as tanks whilst the fire arrows of archers burn down the buildings. In that instance, consider building a mob of Forestguards as your front line and organize them in a loose formation (skirmish) to avoid cleave attacks.

Dryads are extremely weak in combat, though their fast conversion capability can be an asset in all phases of the game. Keep one in your retinue, grab the mines in close reach, and then park the Dryad in a tower until enemy mines are vulnerable.

Wood Elven fliers are capable, but largely inferior choices to a simple mob of Gladewardens and Elven Hunters. However, Phoenix are quite possibly one of few units capable of holding the Wood Elves together, as it is necessary to take over as many mines as possible to increase resource production. Unlike the High Elves, the Wood Elves have no income upgrades, and unlike the Dark Elves, they have no mine fillers. This is the serious, and huge drawback the Wood Elves suffer, that 9 times out of 10 will result in their defeat. Ever since Ancient Wisp Crystal production and Magic Well Gold production got nerfed, they struggle to gain much resources and it gets even worse with the building cost conflicts with the HQ upgrades.

Develop your keep as quickly as possible. Higher level buildings are necessary to generate the gold income required to purchase your archery skills. Make the Animos Rune a priority as well, to ensure that Elven Hunters are available for production as soon as possible. Focus on base development until Elven Hunters become available, then balance base development with unit production.

A rather cruel issue with the Wood Elves is that their main unit production building, the Tree of Life not only conflicts badly with the HQ upgrades but it is one of the biggest and most awkward buildings to construct in the game, a problem that only grows in proportion factoring in the resource difficulties.

Nature Magic is a middle-tier sphere of magic, having several useful spells, but no truly spectacular ones. A good recommendation would be the Ranger class simply because the Wood Elves need a hero capable of melee combat. The Griffonmaster and Sky Rune skills can make your fliers worth the time and resources needed to build them. The modest Nature Magic synergy doesn't hurt either.

For those that are willing to risk starting a battle with no strong melee unit, Druid is the best choice - not so much for the large Nature Magic synergy, but rather for the Guardian Oak and Elemental Lore skills. As with Griffons, these units are much more worth your while when they roll off the production line at level 3 or higher.

A high level Merchant is a feasible class simply because of the requirement of Gold and particularly Crystal income in buildings, units and upgrades/researches.

Retrieved from "https://etheria.fandom.com/wiki/Wood_Elf?oldid=17709"
Community content is available under CC-BY-SA unless otherwise noted.