Back to Warlords Battlecry III 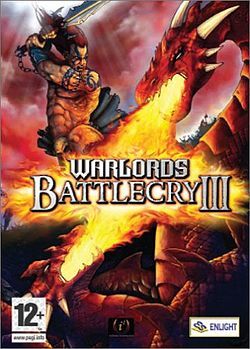 Like it's predecessors it has elements of role-playing video game in that players can complete optional Quests, as well as create a customized Hero character that can level up from battle to battle and equip unique and powerful Items.

The Campaign is a mixture of an overhead strategic map with real-time gameplay. Departing from the system used in Warlords Battlecry II, which consisted of a Risk-style board with territories, Warlords Battlecry III divides the world of Etheria into numerous locations (mostly cities) that players travel between, with various events at each. Almost all of the map locations have missions to play, some of which are not readily visible until other missions have been completed, as well as shops, academies, and/or mercenaries for hire. Once a player enters a mission, the game switches to real-time strategy gameplay.

Sounds are pretty present in the game: background musical soundtrack, ambient sounds, special effects (combat, spells, UI), units' and heroes' babbling, and system voice-over.
Units and heroes may have up to four different speech lines for each one of those situations: reporting for duty (upon creation), acknowledging a selection by the player, acknowledging an order (move/attack/build), dealing a deathblow (call it a battlecry), reporting when building isn't possible at the ordered place, reporting when a building is complete, and reporting when a site has been converted. Many monsters and animals are limited to roaring, cackling or neighing. Siege Weapons have only one intelligible speech line which is played when they leave their production building. Only melee units may deal a deathblow. Generals and heroes may convert. Builders and heroes may build.
System voice-over comes into two flavors: a male and a female voice. There are 26 speech lines, which makes the game quite talkative as basically, the player is informed whenever an action occurs off-screen.

Retrieved from "https://etheria.fandom.com/wiki/Warlords_Battlecry_III_About?oldid=21080"
Community content is available under CC-BY-SA unless otherwise noted.