Edit
watch 01:36
We're Getting Mutants in the MCU - The Loop
Do you like this video?
Play Sound

This article is a stub. You can help Warlords Battlecry Wiki by expanding it. 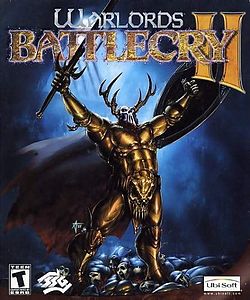 Warlords Battlecry II is a real-time strategy and role-playing game, developed by SSG as the sequel to Warlords Battlecry. It was released in the USA on March 12, 2002.[1] The game requires the player to build buildings and create units in order to defeat the enemy, whilst sending their Hero on optional quests.

The game is set within the world of Etheria. In the Campaign the player must take control of one of the twelve Races and capture all sixty-seven regions of the land in a non-linear manner. The player does this whilst assuming the role of a "Hero" which he or she has created. Each race has their own type of Hero, buildings and resource dependencies.

The game is followed by Warlords Battlecry III (2004).

Community content is available under CC-BY-SA unless otherwise noted.
Advertisement