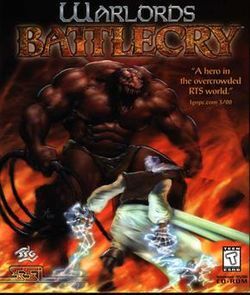 Warlords Battlecry is a real-time strategy computer game released in for the Microsoft Windows in July 2000 in the USA, and in September the same year in Germany.[1] It was the first of new series of RTS games set in Steve Fawkner's successful, formerly turn-based, Warlords franchise.

The game introduced a Hero-building system, combining real time strategy elements with roleplaying elements (hero development, stats and skills). This makes the series the first to be called "roleplaying strategy", a term coined by its creator, Steve Fawkner.

There are nine Races:

There are four classes, Warrior, Wizard, Rogue, and Priest. Each class has at least three specialties, which give access to different skills and spheres of magic.

Retrieved from "https://etheria.fandom.com/wiki/Warlords_Battlecry?oldid=21586"
Community content is available under CC-BY-SA unless otherwise noted.