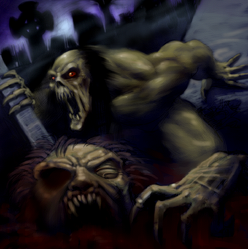 The Undead are a very potent and unique race in Warlords Battlecry 3. The Undead's units tend to be superior to those of most other races, though they may suffer from economic problems due to the units' high expense. Despite this, the Undead's presence on the map can be felt immediately, with hundreds of nearly Piercing-immune units and the ability to counter anything fielded at them instantly via the morph ability. Additionally, the Undead have access to among the best research combinations in the game - they not only get the very powerful and easily accessed Dark Mithril upgrade, but they also get access to a massive amount of various wizardly researches for a spellcasting Hero. All in all, if the Undead can get a stable footing in the early game, their forces can be among the most fearsome available in WBC3.

The undead are a very unique race in that most units are not bought from buildings, but instantly upgraded from skeletons which can mean that the player needs to do a lot of resource-heavy micromanagement. This has a lot of implications for the way that the race is played. Most notably, it allows the player to send Skeletons into an opponent's base, then upgrade them instantly to fit whatever will counter the opponent the most.

To get started, an Undead player's economy will need to be sorted due to the high costs of morphing Skeletons. Gold should be a reasonably high priority in the early game simply to create more Zombies, construct more buildings and upgrade the keep. Once gold is no longer an issue, Metal and then Crystal should be heavily invested in. This will allow the player to create the Undead's army - Wights, Slayer Knights and Doom Knights require Metal and Wraiths, Shadows and Liches require Crystal. The other two resources can be invested into Skeleton Riders should the enemy use Crushing damage.

If the opponent is playing as the Empire or another race which would be challenged by Piercing-resistant units, it may be a possibility to Skeleton-rush them from the start of the game - which makes their arrow towers pointless.

Shadows are the upgraded version of Wraiths. They cost a massive amount of resources to obtain when compared to Wraiths and provide no additional function. Considering this cost and the comparative power-up they receive, Shadows should rarely be used. Except for some frozen "peek-a-boo", Slayer Knights (another advanced infantry) are more fit to man towers because of their Chaos aura, which negates resistance bonuses. In the end, final choice depends on the available resource (Crystal versus Metal).

Skeleton Riders should never be underestimated. They deal a high amount of damage and have a lot of Speed. If the player has spare Gold and Stone and if the opponent is using a lot of Crushing damage, Skeleton Riders are a necessity.

Liches are one of the most valuable Undead units available. They are capable of single-handedly razing an opponent's base. Additionally, Liches can raise an army of Skeletons around them - all of which can then be morphed into anything the Undead player needs. Liches should nearly always be a necessity to any Undead army as their unique abilities cannot easily be replicated by any other Undead unit.

Should the player require a resilient front line to hold back the opponent, Slayer Knights and Doom Knights should more than suffice. Both are very resistant to almost all forms of damage and both inflict Chaos upon enemies, negating their Armour. Should the power be needed, Doom Knights are amongst the most fearsome of units in the game. Doom Knights are incredibly tough, are capable of attacking air units, inflict Chaos, have very high Combat and a large amount of Damage (which is upgradable via Weaponsmith and Dark Mithril).

Bone Catapults are largely pointless to the Undead, however, if the enemy is vulnerable to Crushing damage or if they are using hordes of units, they can be very powerful due to high long ranged splash damage.

Vampires can be incredibly useful at the start of a game thanks to the potential scouting ability of the summoned Bats. In 1.03.24, Vampires have no vampirism ability, but are still formidable units with very high amounts of Piercing damage. Unfortunately for the Undead, these generals are very difficult to produce as they can only be created at the level 5 keep building, unlike most other races. Vampires should be well protected when used for conversion, and if the player already has most of the map, that Crystal should be used for units such as Liches instead.

In patch version 1.03, the ability to upgrade your units into stronger ones can be exploited when you wait until the units are nearly defeated. This is because upgrading will heal the unit completely, but will perserve its experience. This adds some micromanagement, but is a very powerful tactic to use with units such as a Slayer Knight.

Graveyards are the first buildings any Undead player will construct. These can function as Zombie builders and Skeleton builders until the player gets access to Gravestones. Barrows give access and upgrade Wraiths and Shadows and Boneyards upgrade every Undead unit and give access to Wights. The Dark Mithril upgrade within the Boneyard should be a high priority as it completely changes the way Undead units can be used - alongside the Barrow upgrades, Dark Mithril allows Wraiths and Shadows to be used against even physical damage units.

The Altar of Shadows (accessed at keep level 3) allows the Shadow to be created and provides incredibly powerful Summon Mana research for the hero (if the hero is a spellcaster).

Cages allow and upgrade Slayer Knights and Doom Knights, though the latter will also require a Black Library (which provides very powerful upgrades for the Liches such as Staff of Damnation and Liche King).

Broods give the Undead Bats at level 1, Harpies at level 2 and Dragonliches and Frost Dragons at level 3.

Lastly, Undead Towers are somewhat resilient, but suffer from Electrical Damage which is difficult to hit enemies with. Should any defence be required, it is recommended to change that damage type unless the enemy is using a plethora of Electrical-vulnerable units.

The first thing that comes to mind for an Undead hero should be the Necromancer. Being able to summon Zombies to instantly fill your mines can be very useful for the Undead economy. Alongside this, the ability to summon upgradable Skeletons can be used to instantly create an army, anywhere your hero is on the map.

Undead can't trade for resources and they need a lot of Metal. This can be a big problem, but it can be circumvented by having a hero with Transmute from the Alchemy spell list. An Undead Alchemist can fill this roll, but it has one major disadvantage: it has no access to the Necromancy spell sphere until level 10. However, access to both Alchemy and Necromancy on an Undead hero will augment an already powerful race.

Retrieved from "https://etheria.fandom.com/wiki/Undead?oldid=20177"
Community content is available under CC-BY-SA unless otherwise noted.