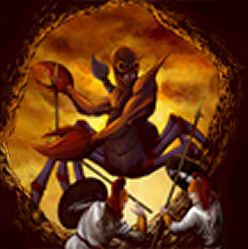 The Swarm are a mid-tier race in Warlords Battlecry 3, designed to overwhelm their opponents with a horde of low-level units. They are not as effective at this strategy as the Fey due to the limitations of their buildings, although they do have some other features that make them the most balanced horde race.

The Swarm have a good mix of low level units, allowing them to rapidly spawn a fast moving attack force. (or bodyguard for the hero). The battle begins well enough with a mix of Husks and Scarabs causing real headaches for any opponent that doesn't boast a high fire resistance. From there however, production becomes a problem. (see Buildings) The high end Swarm units - Scorpionmen and Scorpionpriests - are extremely powerful and relatively cheap and fast to build. The Scorpionpriest ability to summon a fire elemental takes time to build mana, but often proves well worth the wait. Alternatively, a group of Scorpionpriests all casting Ring of Fire at once can devastate a horde or even a base in short order. (Send them into a horde or base, then change them to "Magic Attacker" and enjoy the show) Swarm fliers leave something to be desired - namely air-to-air capability. Aerial units with fire resistance can wreak havoc in the Swarm ranks.

Enter the real drawback for the Swarm. In addition to the time and expense of leveling your keep, your primary unit producing building also requires leveling. While the cost involved is reasonable, the time lost to this process is not. To mitigate this, the Swarm player really needs to build two or three of its unit producing buildings, one or two at level 2 or 3 to keep a steady stream of units pouring out, and a third to level up and yield the critical Scorpionmen and Scorpionpriests. Aside from this nightmare, the Swarm buildings serve their purpose well enough - the ability to drain resources from your opponent's mines is useful.

The Swarm enjoy a two skill synergy with the Warrior class, creating one of the most effective tank heroes in the game. This complements their unit set perfectly. For those that prefer a magic user, the Defiler is likely to be a powerful option, though it doesn't provide as many effective solutions to some of the race's problems.

The synergistic Poison Magic sphere can be abused with the Defiler or Lichelord with various supportive spells which could greatly help the race since many units have a posionous attack (the Melkor's Curse research doubles the speed of poison damage to the enemy). This, combined with the Poison Cloud and similar spells can wreak havoc amongst enemy forces. Unfortunately, Poison Magic doesn't provide any new weaponry (except the Naga, which is most certainly not enough and can't even be summoned frequently enough to use properly as a weapon) and does nothing to help with the race's disadvantages. Out of those, the Defiler is almost always going to be the superior choice since the Swarm already have access to fast-producing builders and piercing resistant units. The more advanced Undead units may not offer much the Swarm don't already have and they receive no bonuses from any of the race's research.

A different magic sphere of interest would be Pyromancy. It provides your hero with some early game power in the form of fire damage spells, which can easily deal with enemy hordes. It also provides you with a heal and an exp buff, which is perfect for getting the most out of your own swarms. Finally, it has some synergy with Scorpion units. Since they have a +50% attack speed, high health and combat values, as well as piercing resistance, the Fire Breath spell can give a lot of value during an early assault by changing the piercing damage into fire damage. Especially when dealing with units that are otherwise resistant to piercing attacks, or if you are getting attacked by fliers. It can also save you a lot of gold in terms of Scarab production.

For any who want a speedy slayer, an Assassin can be used. The Dexterity bonus this class gives works well with the race's already high Dexterity to create a very fast killing machine. Ignore Armor is almost the centerpiece of the set, allowing the Swarm Assassin to cut through almost any opponent's armour (though cutting through any more than about 30 armour may become a little bit wasteful since that's around the maximum armour for any non-titan unit). The Assassination skill backs this up by making sure that even resistant units are likely to die within a short period of time (working well with the high Dexterity and attack speed). Constitution can be vital to buff the hero's toughness since the Assassin is likely to start with a low armour, resistance and/or HP stat. In addition, the Swarm Assassin can also invest in Wealth, giving a valuable support option to help with the production of Scarabs. This character set may not be quite as useful by comparison to the Warrior in most circumstances but it takes good advantage of the Swarm's naturally high Dexterity and early access to Ignore Armour for anyone wanting to try an alternative melee hero.

An alternative support hero can be the Bard. Since most of the Swarm's game plan relies on Scarabs, naturally it would be a good idea to find ways to produce as many of them as quickly as possible. The Bard offers this opportunity by granting access to Wealth alongside some other useful skills. Divination and Leadership/Swarm Lord can be invested in to buff the horde whilst Diplomacy can increase the number of units to start the game with. Another similar class is the Merchant, though usually this option is inferior to the Bard for this race.

Retrieved from "https://etheria.fandom.com/wiki/The_Swarm?oldid=21244"
Community content is available under CC-BY-SA unless otherwise noted.