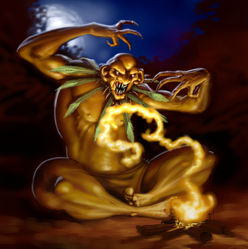 'After the Sundering in 1032 when the four Daemon Lords entered the world, Antharg, the Lord of Plague and weakest of the Four, fled to the fetid jungles and swamps of southeastern Etheria. Once there, he infected many creatures with cruel and terrible diseases until they warped and twisted into the inhabitants of what came to be known as the Realm of Plague.

From the local serpents and reptiles, Antharg created multi-headed beasts called Hydras. When his experiments were finished, and he had bred them with Dragons, he even had hydras that could breathe fire and ice. Not content with this though, he introduced a plague into the local human populace of Colis Tarn and they slowly turned into the cannibalistic creatures known today as Ghouls. Occasionally one of the Ghouls is taken by Antharg and taught the ways of magic - such a creature becomes a Plague Priest, and they are feared throughout all of Etheria.' - http://www.enlight.com/wbc3/gameinfo_races.htm#3

Retrieved from "https://etheria.fandom.com/wiki/Plaguelords?oldid=17714"
Community content is available under CC-BY-SA unless otherwise noted.