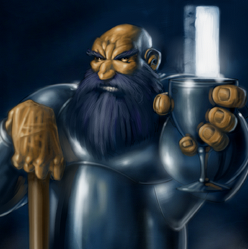 The Dark Dwarves are one of the elite races in the game that really don't have any glaring weaknesses. Their Engineers reap double rewards from placement in mines, allowing for rapid early production. They have a great mix of melee and ranged attacks, plus a few special siege units that create a truly lethal force for both offense and defense. Their hero class choices and towers have a few drawbacks (addressed below) but given the right hero level, these issues become insignificant enough to make the Dark Dwarves amongst the very top of race selections in the game.

Slow is the word of the day for the Dark Dwarves. Dark Dwarven units are slow to build, slow to move, and slow to attack. To make matters worse, most of their units draw heavily on stone and metal, limiting their (already slow) production rate. That said - these same units are extraordinarily strong, full of hit points, and carry plenty of armor and resistance. So do your best to stagger your Golem production (among various types requiring different resources) while focusing on building the structures needed to produce your Wyverns, wraiths/shadows, and siege engines (particularly the Hellbore). As always, try to avoid letting your choice of unit production slow your keep improvements.

Build an army of firebombs (either directly, or through iron Golem production) and task them with base defense until you amass the forces needed to assault your opponent's base. Shadows are priceless - build a handful and send them all after a high-level enemy hero. The result will be a super-Shadow of level 20+, worthy of retaining in your retinue. Bronze Golems are relatively poor generals for production during a battle, although they are excellent choices for your retinue. In the endgame phase when they are available for production, their ability to scavenge resources is of negligible value, but early in the game, it can be priceless. Don't forget to set their attribute to Magic Defender so they automatically take advantage of this benefit. Fully upgraded Flame Cannons are absolutely devastating. They may not be able to target flying units, but the Hellbores and Golems can take care of that easily. Once fully upgraded, Flame Cannons have 90, yes, that's right 90 Fire damage! This insane power is usually only within the reach of very special characters indeed.

A Dark Dwarven assault force should consist of (at a minimum) a mixed core of Golems on the front line, a couple of lines of Hellbores and Flame Cannons, and perhaps some shadows, firebombs, or Wyverns in support (optional). The Golems and Hellbores alone are usually sufficient to take down a base, although a small group of Wyverns or shadows tasked to guard the siege engines from attack is always a good idea. Once the enemy base is more defenseless, send in Firebombs to utterly annihilate the foe.

The Dark Dwarven Tinker is a hero to be greatly feared, and for good reason. The Metal and Stone production costs of the units becomes negligible at higher levels (~ lvl 40). This allows the Tinker to excel in producing a massive and powerful army of golems to steamroll the entire map with. This isn't the only benefit of a Tinker however. They can also vastly improve the hits of all buildings, most importantly, including the towers.

The Dark Dwarven magic speciality is in the Chaos Magic sphere. Chaos Magic is an unpredictable and often detrimental magic sphere, although a few selections are useful. (namely Wildfire/Chaos Bolt, Chaos Plague and Morph Resources). Given a preference to neglect magic as a Dark Dwarven hero, it is possible to select the Warrior class and use the Constitution synergy. For magic users, Shaman or Deathknight are the best choices for the use of Chaos Magic, as both give a synergy bonus.

Another choice could be a Runemaster. In combination with the Engineer skill, Dig is useful for creating tough buildings in no time, Earthpower can repair the said buildings, Statues can be summoned for extra base defence while Doomstones and Stonecall harass and support against enemies respectively. Also, Quarrying is worth a mention. This skill provides a steady income of stone to produce and construct with. Time Magic provides spells that increase resource and unit production, buff the hero and his army while debuffing enemies, summon Wraiths (which can be upgraded at the Ancestral Hall) and kill many enemies at once with the Breath of Dying spell. Of course as a tertiary magic sphere you can still learn Chaos Magic, which might have poor early spells but the later ones can be truly useful and add extra versatilty to an already flexible mage/builder/leader hero.

Retrieved from "https://etheria.fandom.com/wiki/Dark_Dwarf?oldid=17748"
Community content is available under CC-BY-SA unless otherwise noted.