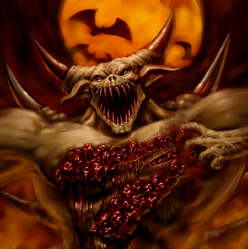 (the following is concerning the fan patches):

At the core of the Daemon race's playstyle is Summoning Magic: the most powerful Daemon units are capable of summoning (permanent) allies to help them gain the edge they need not just for combat, but to improve their economy (quasits can be sent to mines), for harassing other players (imps are fast and incredibly useful for destroying enemy buildings or even mines), for scouting purposes and for summoning reinforcements.

Daemon heroes make excellent Summoners. Although this class does little to expand Daemon weaponry, some Daemon specific-research bonuses also affect summoned units and Daemon heroes may attack souls left behind by summoned Succubi to quickly and constantly replenish their mana. The Circle of Power also affects Daemon unit summoning spells, including the Daemon's Summon Imp spell and the Summoner's Daemongate spell. The ability to simply summon quasits (instead of training them) can also considerably speed up unit/building production.

Otherwise, the Daemon's have very little other choices which make their race particularly effective. The race's Pyromancy sphere would be good elsewhere, but on a Daemon it is not so. It is possible to use the Pyromancy sphere effectively but it is not really that needed since the Daemons have access to fire damage from Salamanders and the other common base destroying damage type Crushing on Nightmares.

Retrieved from "https://etheria.fandom.com/wiki/Daemon?oldid=21365"
Community content is available under CC-BY-SA unless otherwise noted.