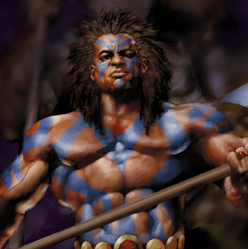 Barbarians are a fierce, but limited, warrior race. They have a poor selection of units when going on the offensive for most of the game. However, they are quick to produce, and quite upgradeable. The most synergistic hero choices for the Barbarians aren't the best, but can provide a generally easier game when besieging or defending via Morale. Barbarians may not seem like a particularly threatening race, but a flying horde of Morale-boosted, upgraded Pegasi, Lightning Hawks and Reavers may change your mind.

The start of a Barbarian game is a fairly harsh one more often than not. An absolutely essential upgrade that must be researched as soon as possible is the Training research. This gives a bonus +10 XP to all newly produced units. The cost of this research is 200 Gold and 200 Metal, which is a serious drawback to the Barbarians at the start of the game due to their main unit production building costing 200 Gold and 100 Stone. Because of this, it is important to stuff as many Thralls into the Gold, then then the Stone then the Metal mines as possible.

After some base construction has been achieved, Metal is one of the most important resources for the Barbarians as nearly all their units use a lot of it. Barbarians and Riders can be massed to defend a Barbarian base or when trying to convert mines. Gold should be a fairly plentiful resource by the time you've got Riders, so most of that gold should be used in upgrading cavalry and pegasi via the Corral. War Dogs are good produces if the Barbarian player has any spare Stone, however, for a great part of the game this is somewhat unlikely.

Warlords can be used later on to buff the entire army with morale boosts. As morale boosts up the army limit, it may be wise to produce some if the resources are available. What is almost unique about the Barbarian cavalry is that they have the view radius of a normal foot unit (most other cavalry units have very restricted view distances).

When it comes to the moment when the Barbarians need to assault an enemy base, the use of Pegasi is almost essential. They provide a lot of power thanks to their upgrades from the Corral and their crushing damage is very useful against buildings. A Barbarian player with enormous amounts of Gold and Metal may want to consider using a spam of Reavers as well as or instead of Pegasi. Lightning Hawks can be very useful for dealing with both ground units or buildings, but usually need decent support in Barbarians, Pegasi or some ground units to soak up damage whilst the Lightning Hawks raze the buildings.

Most of the Barbarian buildings cost Gold and Stone. The main unit production building is the Camp. Later on in the game, construction of Altars of Tempest and Nests (upgraded to level 2) are extremely important. Nests are needed to pump out Pegasi, whilst the Altars of Tempest are needed for producing Lightning Hawks and upgrading the Barbarian army. The cost of most Barbarian buildings is ~ 200 resources (the Mill being 400 and Camp being 300). This cost is acceptable, and the high Gold and Metal income is useful when constructing one of the most important Barbarian buildings, the Mill. The Mill contains research which upgrades the resource income rates from all the player's mines, so it is an essential upgrade which should be researched as soon as possible.

The Barbarian Tower is a fairly weak one. It has a decent amount of hits, but lacks damage. Damage is a very difficult upgrade because if you put a Barbarian in the tower, the projectile will change to a Spear. Whilst this is a very good thing for defeating swarms, it is extremely likely to miss in close combat. A recommendation would be to upgrade the back towers with Barbarians so the enemies are slaughtered whilst they try to bash down the forward tower.

The most synergistic choices may be the Chieftain and the Ice Mage. It is possible to play the latter as the Barbarians have access to the research which increases Mana regeneration. The best choice is probably the Chieftain as their boost to morale and XP for cavalry units is more useful due to the swarm playstyle of the Barbarian race.

Ice Mages may have a more difficult game as their frailty can let them down. They usually require upgrades or items that buff their hits and combat to help them when it comes to close combat. The Ice Magic sphere has a few uses for the Barbarian race. It can provide anti-swarming with Ring of Ice and can become deadly with Ice Storm. However, the Barbarian Ice Mage can find that they have too much mana to know what to do with. The Ice Magic sphere offers no buff spells to the Barbarian army, only to the hero. Out of these, the best by far is Ice Floe, giving a respectable ranged attack that can outrange normal un-upgraded towers.

If the player is looking for a more mercantile hero than a Chieftain, there are a couple of options. Firstly, there is the Tinker. While this may look like an odd choice at first, it should soon sound more sensible as it gets synergistic access to Quarrying, and later access to Alchemy and eventually Smelting. These qualities combined can create a powerful resource generating merchant hero with the ability to exchange useless resources for much more useful ones.

If a Tinker is too frail and the player is looking for something tougher, the Daemonslayer class can be used to create a merchant/warrior hybrid. The Daemonslayer starts off with plenty of hits, armour and combat and has access to some good skills in Ferocity (should it be needed), Warding and most importantly, Smelting. This means the Daemonslayer can take plenty of hits and dish them back out all whilst producing hundreds of Metal for all of those Barbarians, Riders, Warlords etc.

Rangers are also quite useful, offering a synergy in Running and extra Strength and Dexterity. This, combined with investement in Reave, allows Barbarian Rangers to rapidly seek and convert mines as well as fight even against large enemies, all in early levels. In later levels, the Ranger also shines, as Nature offers some useful units that can fill out niches in Barbarian armies (Treants replace Thralls and Eagles as builders, Unicorns heal and awe shooters). Finally, by investing in Taming, they can dish out XP-boosted War Dogs and fliers (including Pegasi) which can become alarmingly dangerous.

Retrieved from "https://etheria.fandom.com/wiki/Barbarian?oldid=19444"
Community content is available under CC-BY-SA unless otherwise noted.